We've released DataConfig 1.2 two weeks ago. It's a serialization framework for UnrealEngine 4 and 5. It's been 9 months since 1.0 and with this release DataConfig is considered feature complete. It now comes with:

We try to cover most programming and usage topics in our documentation, however there wasn't really a chance to explain why we're developing DataConfig in the first place. We briefly documented our motivation here and there's a short video recorded on initial release.

In this post I'd like to talk more about the reasons behind DataConfig: Why an alternative serialization framework for Unreal Engine might be exciting to you.

I started dabbling into Unreal Engine a few years ago coming from a strong Unity3D background. Nowadays many developers share this experience there's even an "Unreal Engine for Unity Developers" page in official docs. One cool thing about Unity3D is the huge pool of ready-to-use plugins and assets readily available. Unity developers each have their own list of "must-have" plugins and libs that one tends to carry to every project. It's very common for us to start a project with nothing but a set of personal favorite packages and grow from there.

My #1 pick was always FullSerializer and FullInspector. They're discontinued as the author moved on to other fields, and later get superseded by Odin Inspector and Serializer. If you already know what these libraries do and are also proficient with UnrealEngine then DataConfig easy to explain: DataConfig is FullSerializer/OdinSerializer implemented for Unreal Engine. Grab a copy on Github and try it out now! Otherwise read on ;)

Prior to these people use a patched version of Json.NET that's compatible with earlier Unity3D versions. At the core these libraries all do one thing: convert between C# objects and JSON, or some other binary formats. The proper term describing these process are serialization(C# -> JSON) and deserialization(JSON -> C#).

Under the hood it's using of C# runtime reflection to figure out the structure of Movie class and access and assign each field by string. Now back in the land of C++ serialization isn't that simple since C++ doesn't have built-in runtime reflection. Classic approach can be manual markup with macro, while modern C++ magic also works (but it's hard to understand).

Unreal Engine uses an alternative approach that is to mark up structs with macros then consume them in a pre-pass with a separated tool called Unreal Header Tool. It understands a subset of C++ header syntax and gets executed before actual compilation happens. This tool would generate tons of supporting code which get compiled along with the actual engine/game code. The end result is a runtime reflection system called the "Property System", which is almost feature parity with C# runtime reflection.

With the property system one can write similar deserializing code as the C# example:

Here I want to stress that the example works in stock Unreal Engine. FJsonObjectConverter is a class in builtin module JsonUtilities. Compared to conventional C++ deserialization it's already a huge step forward. If you look at the code huge trunk of the logic is in ConvertScalarJsonValueToFPropertyWithContainer() method. It looks at the current FProperty, which points to a UPROPERTY() marked field, and decide how should it be converted from the JsonObject.

DataConfig takes this idea further by implementing a set of API on top of the Property System and trying to make it easier to use. As an example we have JsonObjectStringToUStruct implemented with DataConfig with the snippet below:

It's an almost drop-in replacement in around 20 lines long. On top of that:

Many types in JSON and Property System have a direct one-to-one mapping. For example JSON bool maps to C++ bool, JSON string maps to UE FString, and [1,2,3] in JSON should be converted to a TArray<int> instance. However for some data types the mapping isn't so clear, or maybe we have a very specific thing in mind:

DataConfig provides mechanism to customize the mapping between property system and external format. Our benchmark use case is to serialize FColor to a #RRGGBBAA string and vice versa:

Details are documented here. The key takeaways are:

We aim to provide flexible customization that allows our users to do whatever they want. Let's see some examples:

Now that you know DataConfig comes with JSON and MsgPack support, it allows fancy serialization and deserialization. But what should you do with it? When working on the project we have a user story in mind that is to support alternative data pipeline in Unreal Engine.

If you're not familiar with the concept of data pipeline or "Data Driven Design" here's a very good post on this topic. In short UnrealEngine supports DataTable and DataAsset that allows users to configure gameplay values within the editor. A common gripe is that UnrealEngine saves data to disk as uasset files, which are binary blobs. Binary format make meaningful diff almost impossible. It also suffers when things go wrong, notorious dilemma is "editor is crashing due to a bad file but you need the editor running to fix the file".

We favor textual formats as the fact that one can easily grep through them and peek its content with any text editor brings us peace of mind. Here we want to clarify that many successful titles ships with binary formats. It works but it takes effort and especially disciplines to manage. There's plan to support text based assets but even with that the textual files are not meant to be edited by human.

Gameplay Ability is a built-in plugin for building data driven abilities. It's canon example of how to do data driven with Unreal. You can derive some blueprint classes for custom logic then store configuration within class defaults.

We have an example that populate GameplayAbility and GameplayEffect from a JSON file. Given a JSON like this:

Right-click on a GameplayAbility blueprint asset and select Load From JSON， then select this file and confirm. It would correctly populate the fields with the values in JSON, as seen in the gif below:

This example demonstrates the idea of using a set of external JSON files as the authoritative data source. In this vein we have a premium plugin called DataConfig JSON Asset on the UE marketplace.

Write a data asset class that inherits UDcPrimaryImportedDataAsset, which is a common base class provided by the plugin for asset management:

The next step is to prepare a JSON file on disk like this:

Then just drop the file into the content explorer: 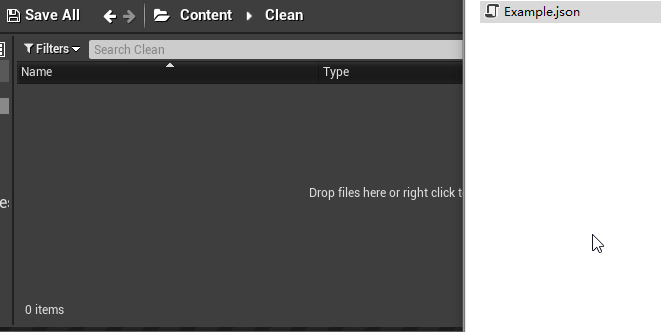 The engine supports importing CSV as DataTable out of the box. DataConfig JSON Asset is following the same practices of importing external files into the engine as uasset. By going through this standard importing procedures we get many cool features like auto reimport on file changes. We also provide handy tools for batch import/reimport.

DataConfig JSON Asset is an example of an alternative data pipeline. Users should author and modify JSON files manually and the plugin would parse, validate and import them into the engine. In this setup JSON files are considered authority source of truth while the imported uasset files are considered transient: they can be wiped and recreated easily.

Now in reality it's very tempting to tweak the data assets in the editor then forgot to sync it back to JSON. The point I want to make here is that DataConfig makes alternative data pipelines relatively easy to implement. We decided to ship no tooling nor editor code with DataConfig core module as we realized that there simply isn't a one-size-fits-all option in this space. It offers is a set of tools that you'll need to spend engineering efforts to build on.

DataConfig is something that we really wanted and hopefully it would be helpful to you. Grab it here and give it a try! It works on UE 4.25 and onward.

Here're some random note that doesn't really fit into this post but still: